JAWS in Provence - The Spooner Experience 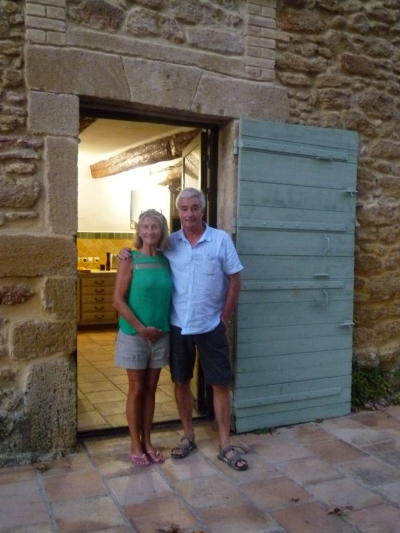 Apart from Janet and Michael, who decided to explore Troyes, we all stayed at a delightful Logis just off the motorway at Magnant.
So far so good, no traffic........

Total confusion in the hotel lobby in the morning, which resulted in queueing to pay our bills and Mike discovering he had paid for everyone's meal the night before!
Eventually we all set off and headed for Lyon. To cut a long story short, after witnessing what seemed like the entire population of France returning from their summer holidays, we finally arrived at La Genestiere to a very warm welcome from the Spooners, and some very cold beer and rosé wine. That is, all of us except Viv and Phil, who decided to bypass the motorway traffic, and go off piste. At around 7 just as were getting a bit worried, Viv and Phil arrived, and we were ready for the evening festivities. This was an invitation to the wine producers get together in the village hall. After speeches, pressing of grapes to get the Specific Gravity of the crop, and a small sample of the grape juice, we were treated to food, and of course some of the best wines on the Côtes du Rhône. 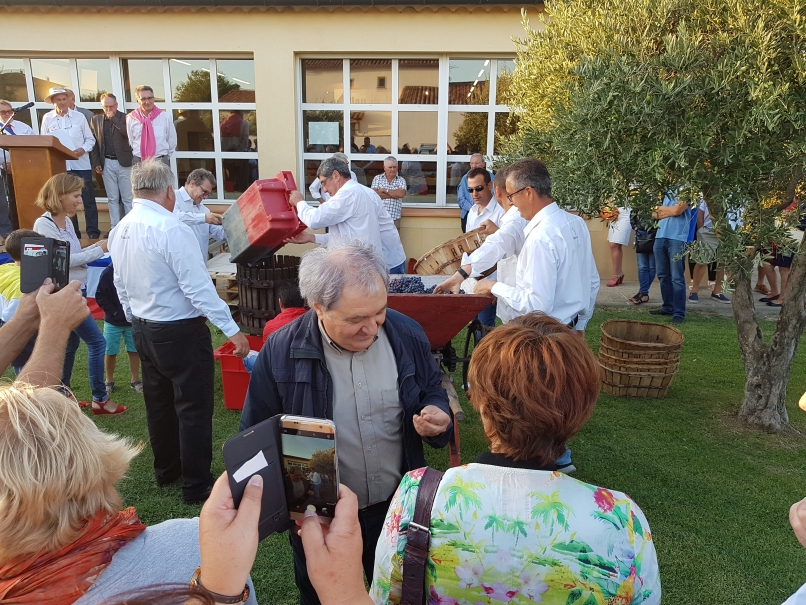 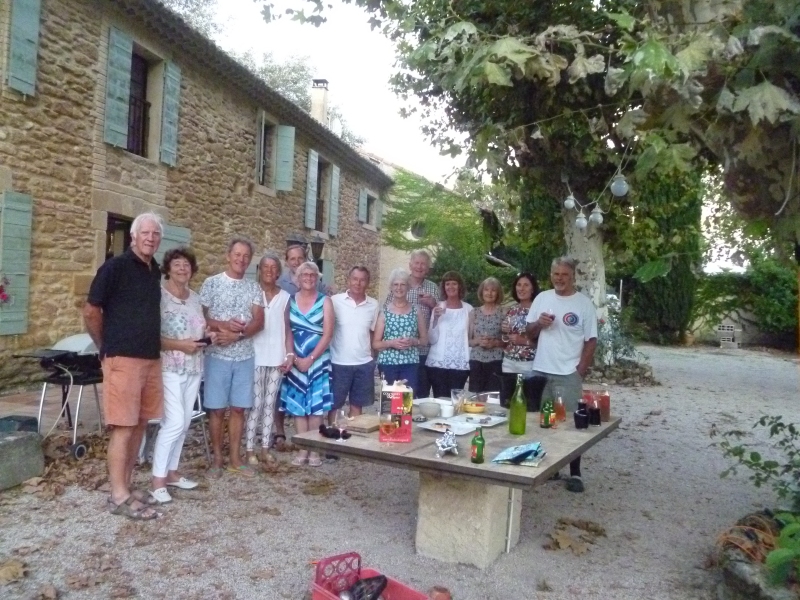 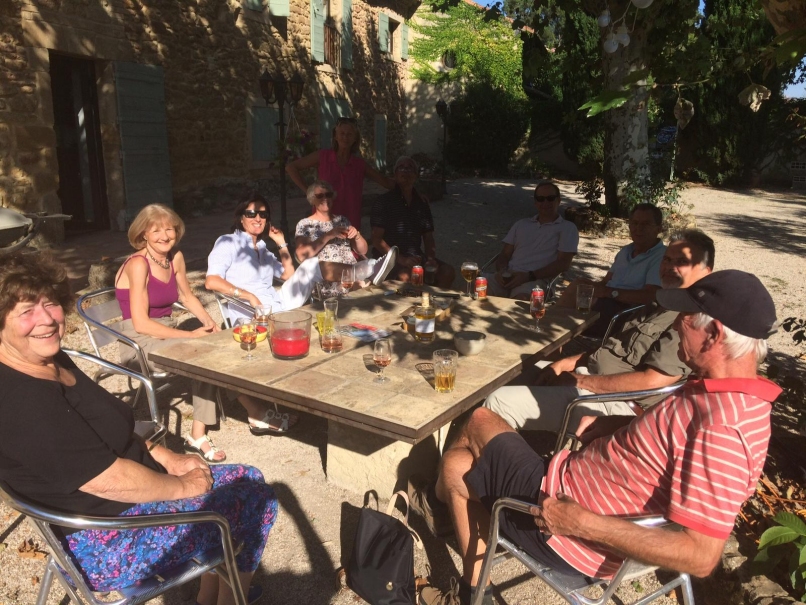 Richard S kindly offered to show us the area, so we all set off in beautiful weather to enjoy the fantastic scenery. Richard promised more "interesting" terrain than the flat roads around La Genestiere. And so it proved, as we enjoyed the undulating landscape and hill top villages. We stopped for a break in a place called VilleDieu, which looks just like the set of Allo Allo. After briefly visiting Vaison La Romaine, we headed off for lunch, and then on towards Malucene. At this point, the group split up, so some off us could experience the Ventoux gradient but not the distance. Eventually we all met up again at Beaumes de Venise, and headed off back. The day was a long one, and after covering 50 miles or so, the beer, cold wine and snacks was especially welcome. 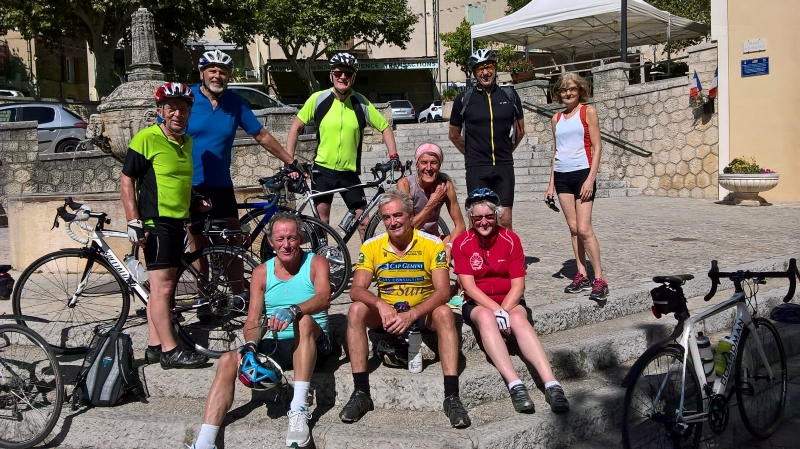 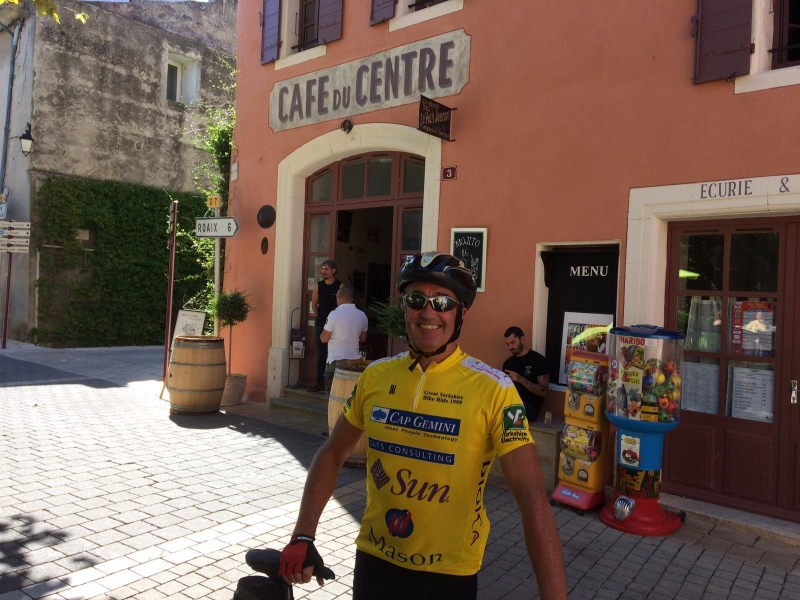 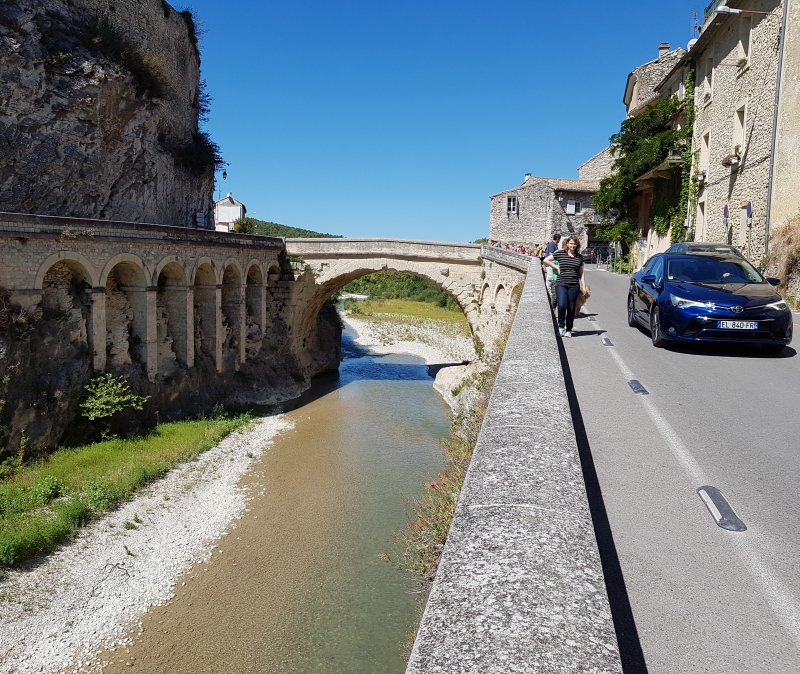 As Janet knows the area well, she kindly offered to take us on a shorter ride than the previous day, which was perfect as some of us were hoping to tackle the big one the next day. After lunching in Vaison, we headed back in good time for an afternoon's swim, and of course more refreshment. I should mention that Richard and Sue offered to do a 3(actually 4 incl cheese) course meal for us every day. As we know in JAWS both Sue and Richard are excellent cooks, and the meals were absolutely delicious. 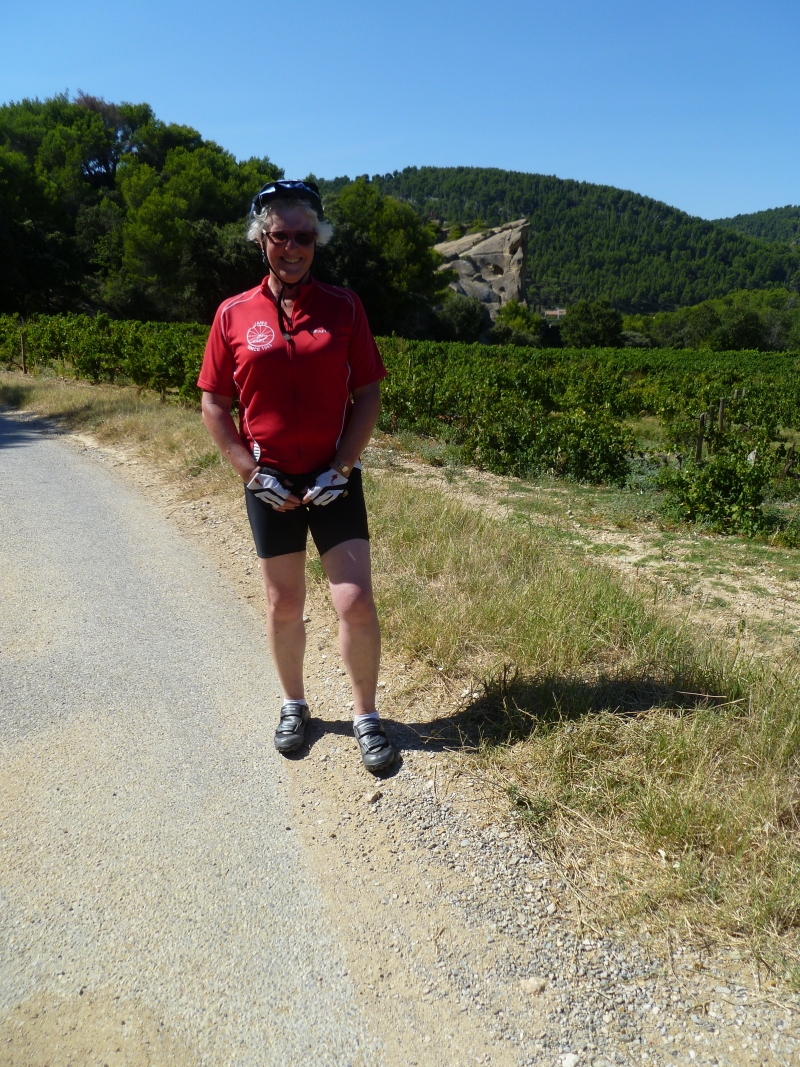 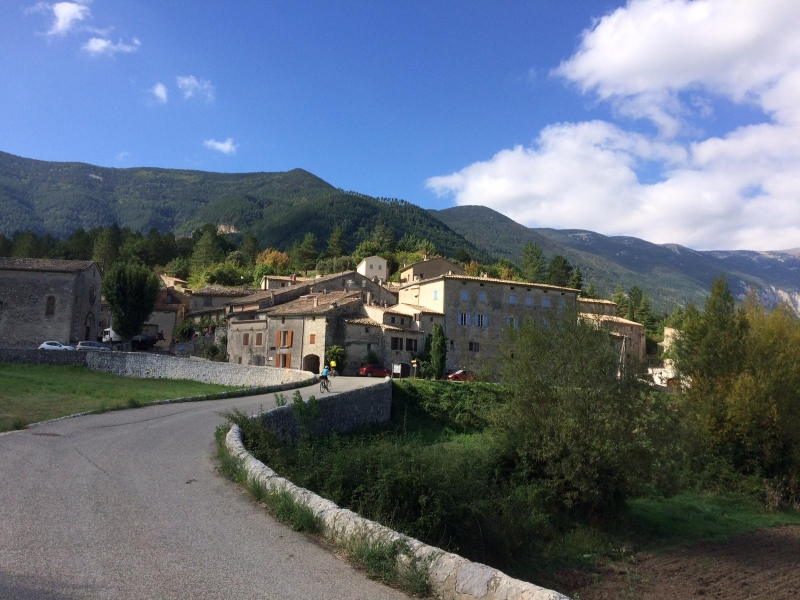 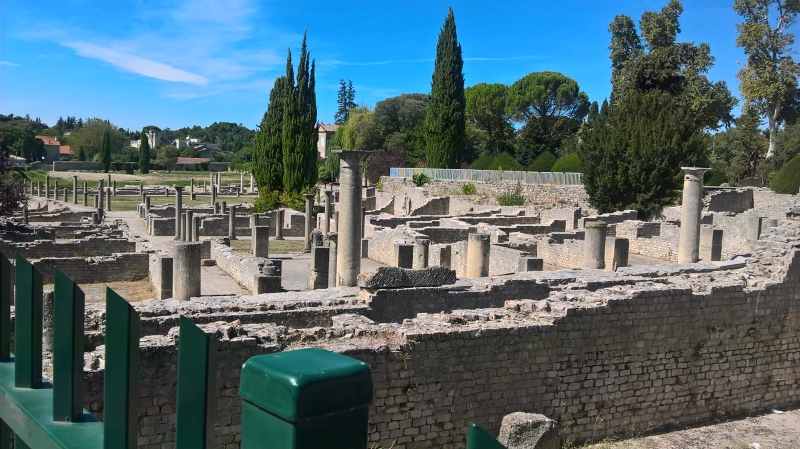 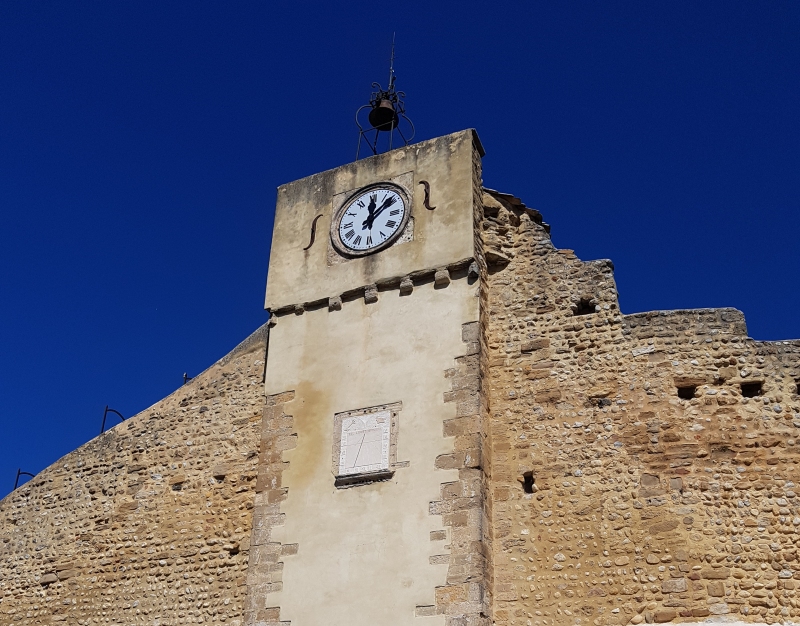 Graham, Richard F and Paul set off at 7 for Malaucene, parked the car, and bumped into Richard S, who was going to do the route to Mont Ventoux straight from Malaucene. We headed for Bedoin, which is acknowledged as the starting point for the classic route. Michael and Janet left a little later. After a lovely warm up ride through the pine trees, we arrived in Bedoin, and decided to have a coffee as you do. After about half an hour, just as we were getting a little too comfortable, we decided that that we couldn't put it off any longer, and started the big climb to the summit of Mont Ventoux at around 09:30. Even though we were prepared for the 21Km of incessant climbing, it was a toughy. Michael overtook us at about the halfway stage, and Janet provided fantastic support, with water at the ready, and buckets of encouragement. Eventually Richard reached the top, followed by Graham and Paul. After a well earned rest, we all enjoyed the 20K downhill! In the meantime, the other JAWsees had been cycling, wine tasting and sightseeing, and we were also joined by Tracey and Pam, who flew into Nimes that morning. 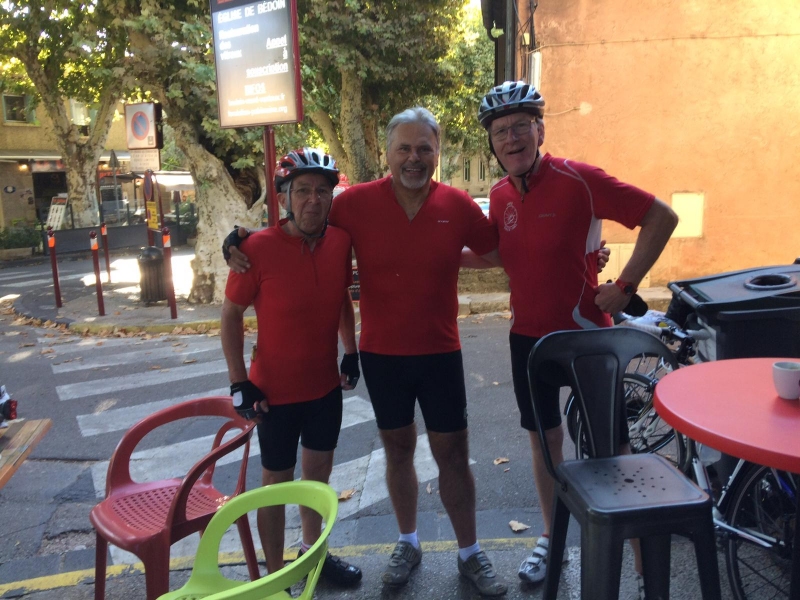 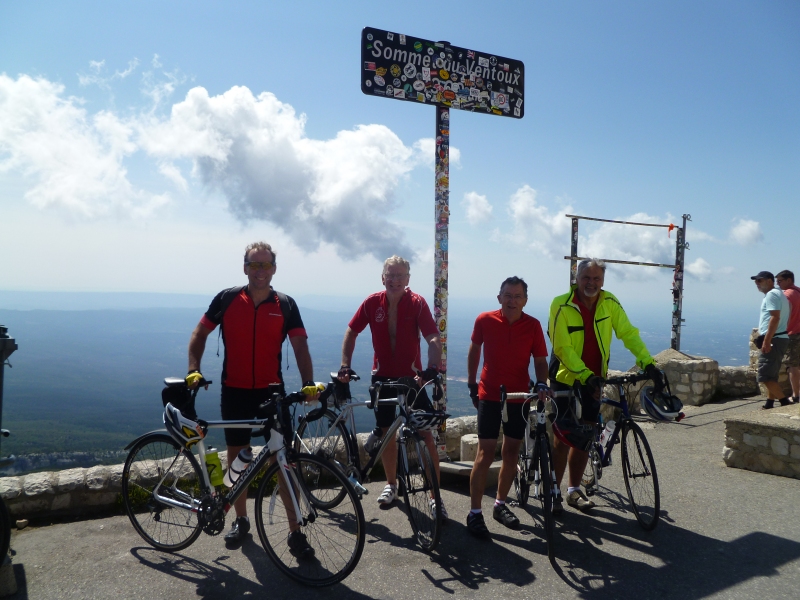 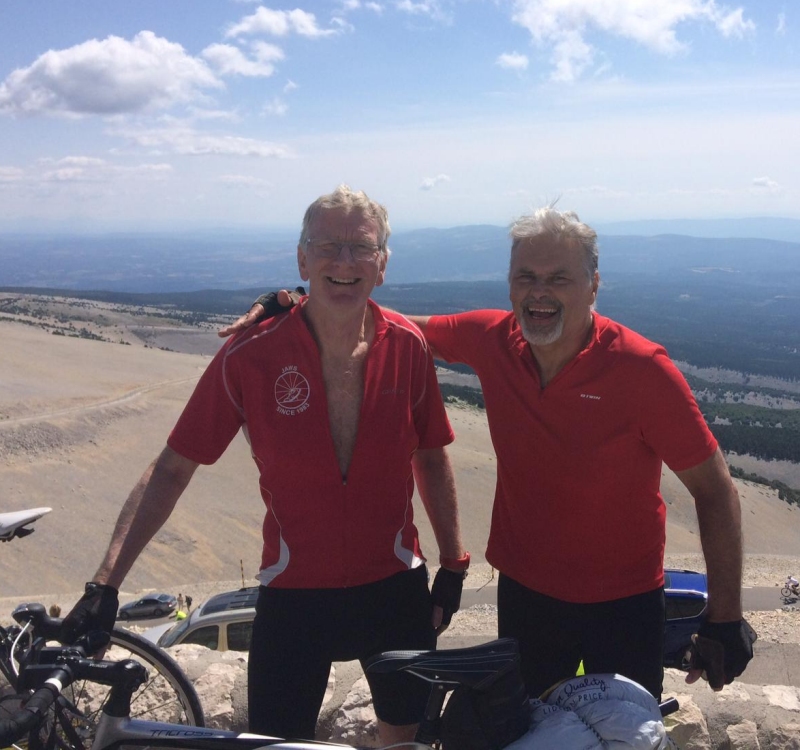 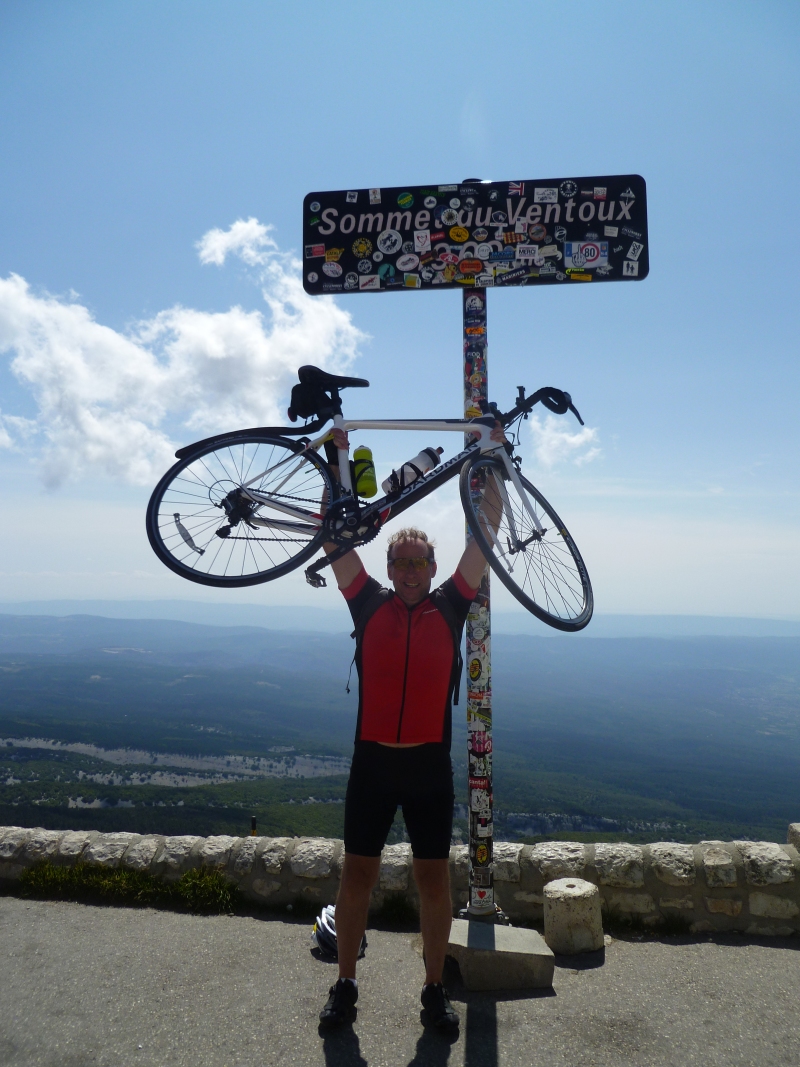 Viv and Phil decided to tackle the Toulourenc gorge, while some of us went off for a lighter cycle. Others decided to chill out, and go looking for wine to buy.
We also wanted to give Sue and Richard a break from cooking, so we thought we would do a BBQ, which turned into a great evening. 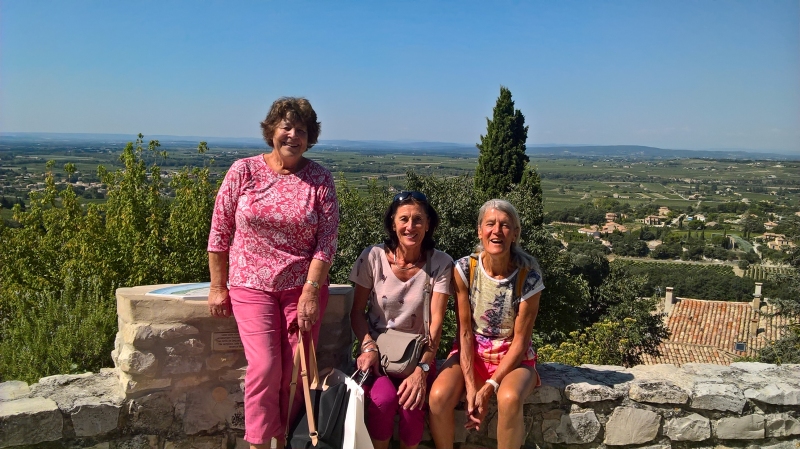 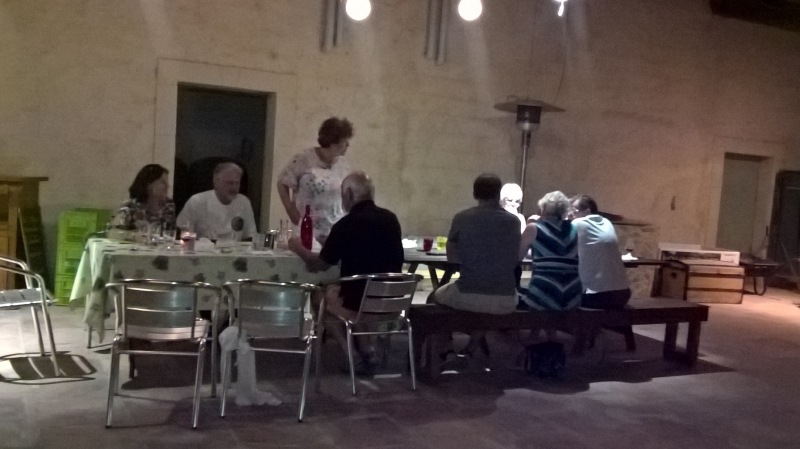 2 of us (Graham and Pauline) ignored the weather forecast, stuck to plan A, and set off for the new Via Venaissia cycle path, which links Jonquière to Carpentras. This was an old railway line, with the old railway buildings still in existence. It must be the best kept cycle path in France, beautifully smooth, and kept spotless by teams of young student workers(volunteers?).The weather didn't seem so bad, but once we made the decision to go to Isle Sur La Sorgue from Carpentras, the rain arrived with a vengence. Taking shelter in Isle Sur La Sorgue under cover for lunch proved the most prudent thing to do. Just as we thought we might have to call the cavalry to pick us up, we saw a faint trace of blue sky, and decided to head back. As we cycled back the afternoon got better and better, and soon we were bathed in sunshine for the rest of the day. We returned to find the others had been more sensible, and delayed going out till the afternoon to see Orange including the amphitheatre. 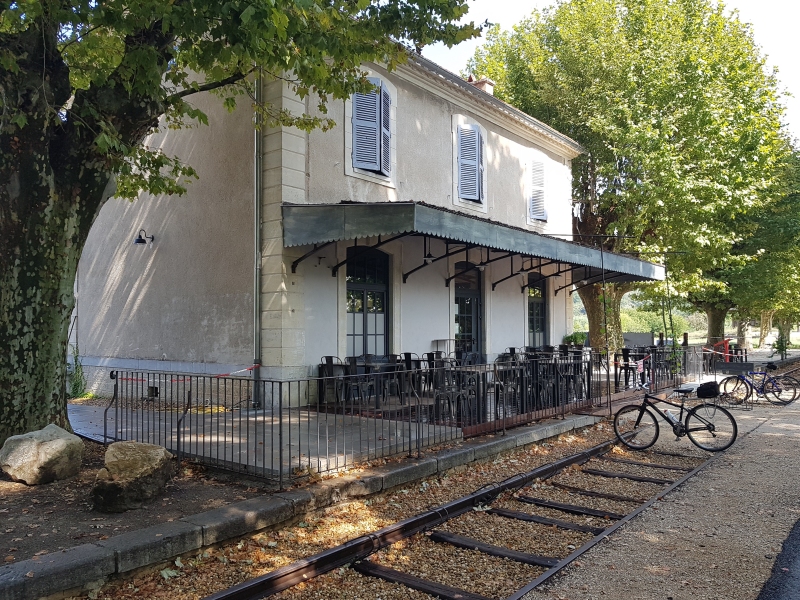 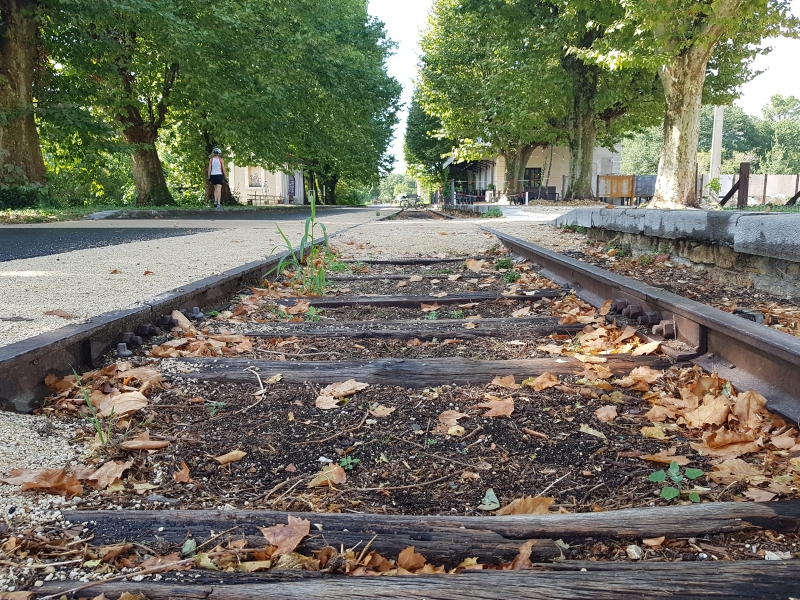 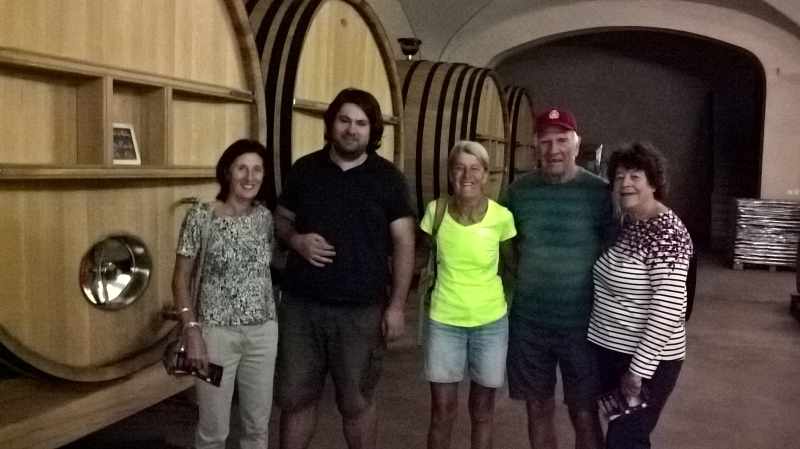 Richard promised us some spectacular scenery on our last day, and didn't disappoint. We managed somehow to get all the cyclists near the top of the hill at Entrechaux, thanks to our superb car support team of Sue, Mike and Janet. The whole day was just a spectacular 50 miles of stunning scenery, taking in Sault (quick lunch), and the beautiful Gorges de la Nesque, culminating in the now familiar Via Venaissia from Carpentras to Jonquière. After such a tiring day, we could have done without the mistral in our faces, but it was worth it. We finished off the evening with yet another memorable meal from Richard and Sue. 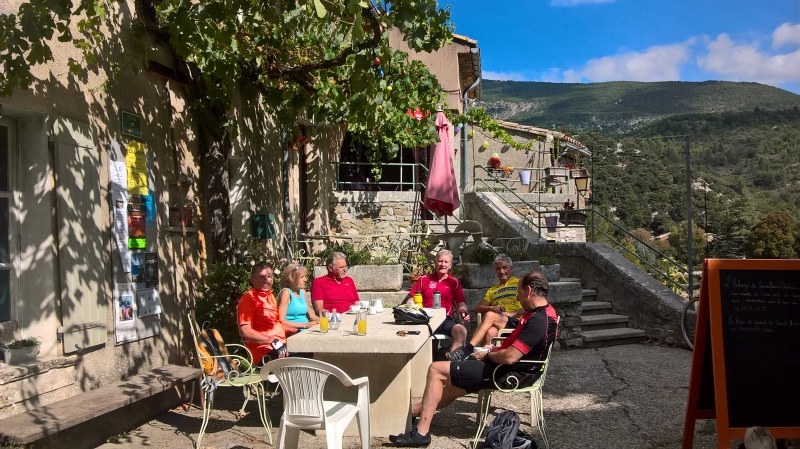 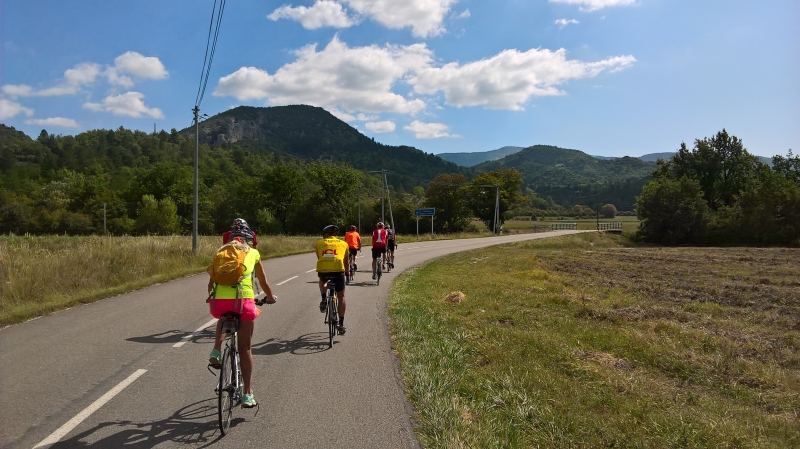 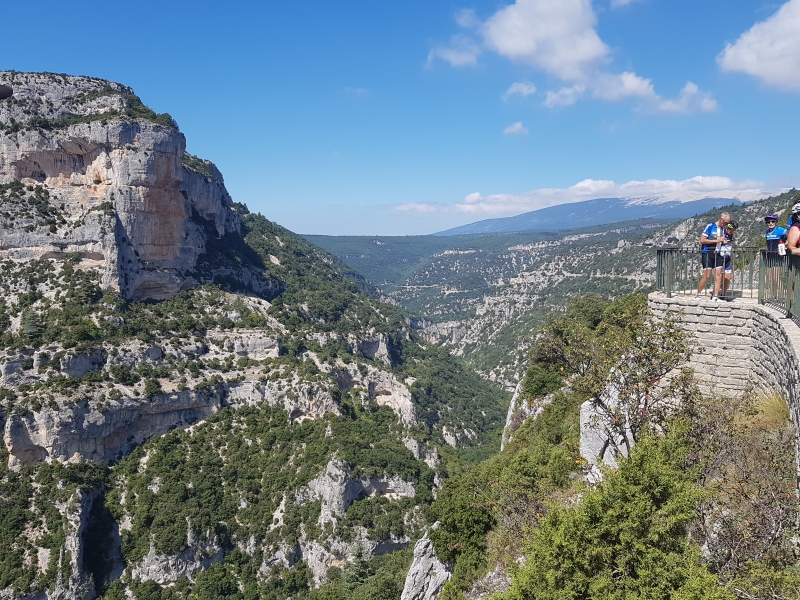 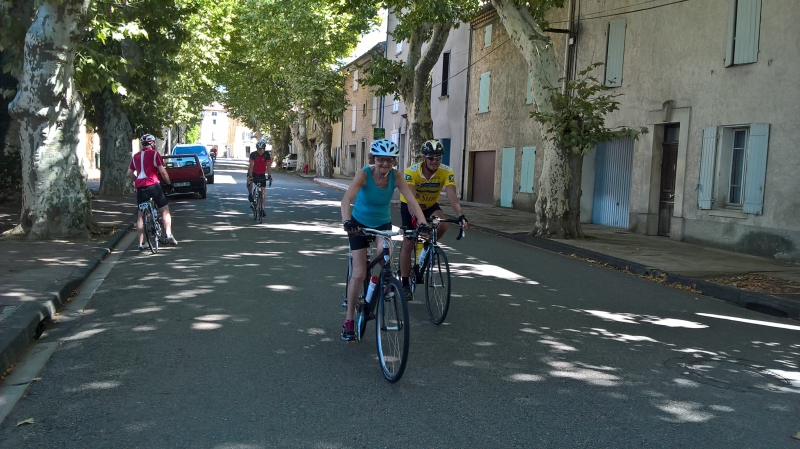 We each set off on our separate journeys in the morning, having had a fabulous time, as there was something to do for everyone - cyclists and non-cyclists alike. Our special thanks must go to our hosts Richard and Sue, who made us feel so welcome, and went out of their way to make it a special holiday for us, in the true spirit of JAWS.
One person was foolhardy enough to attempt a 200Km ride down to Toulon on the coast, but that's another story.........